I'm back from Omaha. I am still affected by a mixture between the jetlag of the trip and the state of shock after listening to two legendary figures of the value investing as they are Warren Buffett y Charlie Munger.

As promised, now I have to tell my trip to the Berkshire Hathaway Annual Shareholders Meeting 2015 with hair and signs.

The hardest part of the Nebraska expedition was probably the displacement.

The outward journey was quite an odyssey in which I went through 4 buses, 2 planes and a car. In total, more than 29 hours of travel since I left my house until I arrived together with Vicente Varo (CEO of Unience) and Miquel Boix (commercial director of 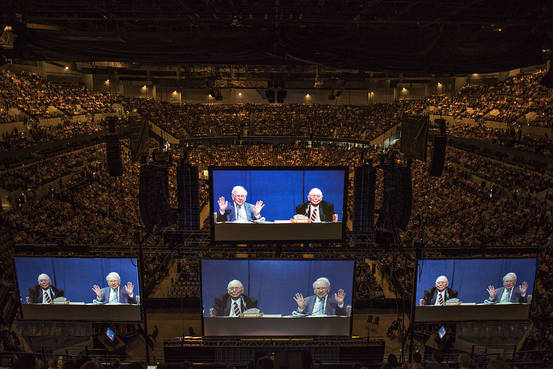 In order not to dwell on this topic too long now, next week I will publish an article with a selection of Buffett and Munger's best quotes from the annual conference.

I just tell you that they did not disappoint me at all.

The fair with Berkshire companies

In addition to the conference itself, the shareholders' meeting also has a fair where the companies in which Berkshire Hathaway has a stake have stands to display their products.

Among the companies were corporate giants such as Coca-Cola, Heinz, Wells Fargo or Fruit of the Loom. There were also others less known in Spain such as Net Jets or Sees Candies.

Products and merchandising of all kinds were sold at the fair. I took the opportunity to buy a couple of books and a few souvenirs.

Attending the Berkshire Hathaway Annual Shareholders Meeting wasn't the only good thing about the trip to Nebraska. There I had the pleasure of meeting other frikazos from the value investing (Admittedly we are, I number 1) who came from everywhere and united the social network for investors Unience and for being fanatical followers of Warren Buffett.

Besides Vicente Varo and Miquel Boix and I, who came together from Madrid, we were with other uniencers. We were joined by Julen Baztarrica and Joaquín Aranzábal and Fabián González from Barcelona. After the event, we were able to share a talk and some beers that could not last too long due to accumulated fatigue. I do not know when or where, but I am sure that we will meet again in the future and remember the experience between beers.

Was it worth it?

I have it clear. It has certainly been worth it. In fact, I hope to repeat in the future.

Of course, my intention would be to extend the stay a bit to live the experience more calmly. My recommendation for those who want to go next year is to arrive on Thursday to be able to attend the fair calmly on Friday, and take advantage of Sunday to do a little tourism in the area.

I would like to once again thank Unience (and especially Vicente Varo for his excellent organization of the trip) and Bestinver Asset Management for the sponsorship for this great initiative. I also encourage you to be the first of many more contests of the style.

Finally, here you have me to answer any questions about the event. I await your comments!