Magallanes Value Investors is one of the leading investment managers in Spain. Captained by Iván Martín, they have managed to consistently beat the market since its inception. As I always insist on the importance of learning from the best, I have not missed the opportunity to analyze the presentation of the II Investor Day organized by this manager.

In this article you have the video of the conferences and subsequent questions of the II Magallanes Value Investors Investor Day together with a brief compilation of the highlights of the event.

Video of the II Investor Day of Magallanes Value Investors

Video with the rest of the questions to the Magellan team

"If the price of the stock was 50% below we would surely buy it."

Iván Martín on the generation of ideas

In the following graph we can see the main sources of idea generation in Magallanes Value Investors. 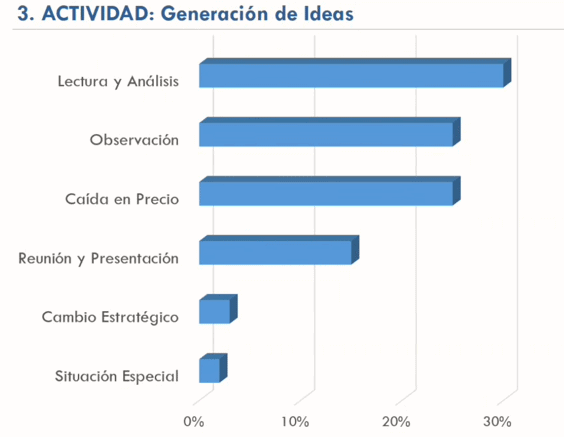 Iván Martín about when to buy

"When the market is strong there are not many opportunities to buy."

"When the markets fall and fall hard we are relatively happy because we have the opportunity to buy."

Iván Martín on investing in moments of pessimism

"The differential point is the attitude towards investment, keeping cool and serene."

Iván Martín on investing in the long term

Iván Martín on the companies they like to invest in

The companies in which the Magallanes Value Investors team like to invest are the following:

Iván Martín on his biggest mistakes

"My biggest professional mistake was the investment in Pescanova, which was a fraud, but it is a mistake."

"I learned to provide information to audit reports."

"When a company changes from a great auditor to a lesser known auditor and the audits come out clean, you may have to be suspicious."

“It fulfills many of the points we are looking for. It is not in the interest of the investor in general or of analysts. "

"It is a conglomerate of things that now, with the entry of the new shareholder, is adding value."

"It has practically all the characteristics we look for when making an investment."

"The company was and is very cheap."

"A month ago there were really very solid results, margin expansion, debt reduction, which again gives us a potential to almost double."

"We believe that the sum of the individual businesses is worth much more than the price at which the company is trading."

"We continue to believe that the strategy that the company is following with the investment in the postal bank makes sense."

“The potential for appreciation is more moderate. For this reason, it weighs 1% in our Iberian portfolio. "

"We have sold our position."

"We have analyzed the results they have presented and their business model and we believe that it may be under threat, especially in France, where the competition is reacting very strongly."

"With this change in the business model, we have decided to sell the position we had in the company with a slight capital gain on the position."

"Spanish banks have looked at them in the past and recently and they still do not offer us sufficient safety margins to buy."

"Optically they seem cheap, but the risk they have intrinsic in their valuations does not compensate us."

Iván Martín on investing in gold

"We do not consider gold to be an investment, because we understand investments as investing in productive assets, which generate profit, which distribute dividends or which produce something, which are profitable."

“We do see it, on the other hand, as a possibility to replace cash, especially in negative environments. That would be the prism under which we would view a gold exposure. "

"It is in our European portfolio."

"With the falls we take the opportunity to buy a little more."

"An overly indebted company is a red line for us."

"For us, a relatively high debt is 3 times the EBITDA."

Iván Martín on the risk of technological disruption

"Everything that we are not able to glimpse what may happen in 5 years, due to the risks of threats of technological disruption, because we prefer to be outside."

Iván Martín on the maintenance capex

"We approximate the maintenance capex with depreciation, it is the best measure to approximate it."

"A company that does not grow has to spend yes or yes a level of capex that covers what they are depreciating simply by existing."